I Thought I Was Healthy… Until I Started a Health Company

For almost three years, I knew I wanted to build TwoGrand. I wanted to change the health game for many personal reasons, but my own health wasn’t one of them.

I always viewed myself as pretty healthy. I’d be an example to be followed – the tutor, not the tutee.

Looking back on 2013 – TwoGrand’s first (partial) year in existence – I see that I’ve rarely  ever been so wrong.

And never has being so wrong made me so confident in something being so right.

My executive health summary paints the picture of an average dude with no problems. And that was the problem.

From the time I neared high school graduation, I’ve weighed between 157 and 165 pounds. The weight fluctuation has been almost exclusively due to actively gaining (and then sadly losing) muscle.

I play competitive adult soccer, and although my fitness level isn’t what it used to be, I can run a 5K without pause.

I knew I had a few bad eating habits – namely a gross overuse of the microwave that was an outgrowth of my insane schedule when in college – but nothing had inspired me to make real change.

I remember the meal Alex (my co-founder) and I ate the night we agreed on the name TwoGrand. I remember it because it was the first time I fully acknowledged the stark contrast between real meals and the stuff I was often eating.

The meal Alex made was simple, and old as time: Chicken (with a drizzle of gravy), mixed veggies, and potatoes.

It was delicious. It also stood out like a sore thumb on my TwoGrand profile.

I couldn’t recall the last time I’d made dinner like this. And remember, we’re not talking gourmet French cuisine here – just chicken, veggies, and potatoes.

Four of my dinners from the previous week looked like this:

Sure, I kept the calories down – I’ve always done that – but where were the vegetables? Or the fruit? Could I be treating my body better?

Comparing my meals to Alex’s (and also eating Alex’s meals because, you know, co-founders), combined with the influence of my wonderful girlfriend (and chef extraordinaire) Cat, gave me all the evidence I needed.

So I had an “Aha!” moment. Big deal – we all have them. The real magic came in how I, almost unknowingly, undid decades of habitual behavior thanks to an app I wasn’t supposed to be the audience for.

Arguably the most powerful aspect of TwoGrand is its visual nature. Seeing meals in full color, texture and size, gives you perspective that no amount of text and portion descriptions can.

Arguably the second-most powerful aspect is the repetition. You see a new food once and it’s interesting. You see it a second time – from a second person – and it’s intriguing. You see it a third time and you’re asking about how to prepare it. The fourth time, you’re posting it in your own meal, and beaming from self-satisfaction. 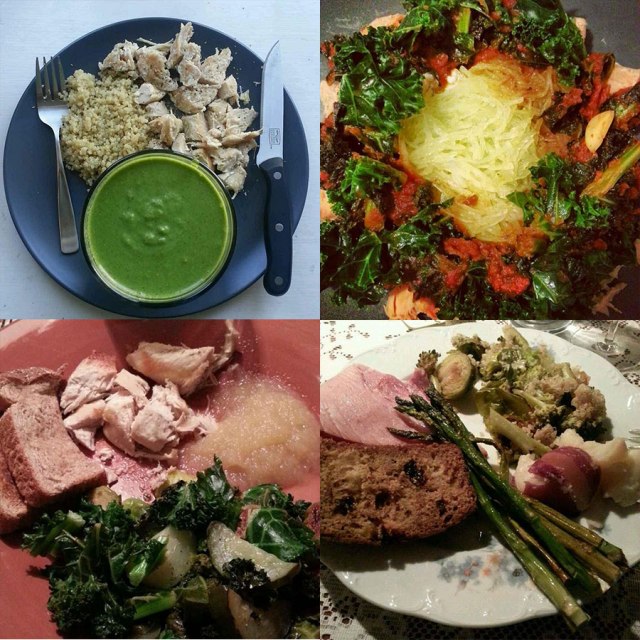 Only when I went home for the holidays did the transformation hit me. The guy whose only groceries opinion growing up was which cereals to stock the cupboards with, was getting involved in the preparation of a six-person Christmas dinner.

I mean, my Christmas gift to my parents was a top-shelf blender. Two years ago, Vegas set the odds of that happening at slightly longer than a Milli Vanilli comeback.

I used to joke that 80% of my life’s calories had come from 10 foods: Cereal, milk, peanut butter, ice cream, Gatorade, apples, berries, bread, carrots, and beer.

It wasn’t really a joke, of course.

TwoGrand has changed all that. I enjoy food more than ever before. I feel I understand food more. . I am healthier.

One particularly awesome person has lost 20 pounds in two months, and looking at her first few days compared to her most recent days is incredibly uplifting.

It’s working. And if I didn’t go through it myself, I’m not sure I’d be as adept at explaining why.

In 2013, I set out to build a health company. Turns out I was its first customer.

YouFood is the world's #1 rated health app. Let's eat better, together. Get the app - it's free! - on iPhone and Android: http://www.joinyoufood.com/main/open-app
View all posts by YouFood →
This entry was posted in Uncategorized. Bookmark the permalink.